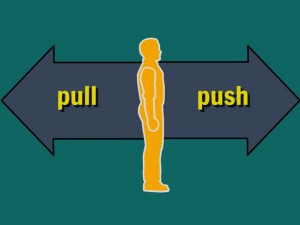 Push pull theory can be applied to many facets of life. It’s applicable to both the business world and the dating world. In the dating world its used as a method to generate attraction while simultaneously getting past a women’s “bitch shield”.

An easy way to explain push pull theory is: 2 steps forward & 1 step back. An example of push pulling is teasing a women and joking that your “together” and a few seconds later breaking up (over and over until she shit tests you).

What push pull theory does for you is it engages the girl sexually, and then disengages her sexually. This is very different than constantly pulling the girl towards you. Every time you push her away you actually create more attraction (within reason don’t push pull her 10 times in a row).

By using push pull theory you get her emotions going and then push her away before she has a chance to put her guard up. As a result we pull her in and push her away before she can resist.  The general rule of thumb is to keep push/pulling until she shit tests you. If you aren’t familiar with shit tests you can check out my post which covers them in detail by clicking: push pull theory.

The idea of push pull theory is to generate attraction in women and make the women you desire to view you as alpha and sex worthy. As a result she’ll view you as the prize that she has to win over.

Here is another example of push pull theory:

Every time you use push pull theory you’re generating a sexual and emotional reaction with the women. She is going to desire you and chase you.. If you do this in a playful way you’ll almost always get a positive response.

Try out push pull theory for yourself in the field, its going to take some practice. Remember to keep the interaction playful and let the women sense that your doing all this in a fun and social way.

If you have any questions about push pull theory feel free to shoot me an email or drop a comment below.